This is Day 2 of the A to Z Challenge. Using the letters of the alphabet as a starting point, bloggers are challenged to write a post everyday except Sunday. It's a good way to meet new authors and bloggers, learn about interesting books and topics and gain readership. If you stalk me (follow) I will stalk you!


My posts are based on emotions/mental drama and anguish while introducing you to some books bearing the same or closely related titles/themes. The letter for today boys and girls is B!


B is for Burning 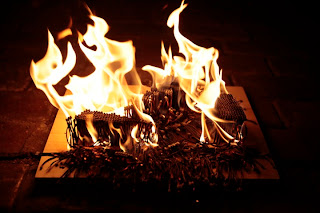 Don't you dare sit there pretending you do not feel it! The heat. Intense. Overwhelming. Burning. I'm fanning my face and neck but to no avail.  The more I move the higher the temperature climbs. It is becoming more out of control. Burning. I place ice on my brow and slowly slide the melting square down my arms. Yet, I'm still burning!

You sit there looking stunned and nervous shaking your leg, as if trying to put out the flame and bring an end to the suffering. Smoldering. Plunged between fire and desire, lost under the spell of the blue-red-amber glow. Never ceasing. Powerful. Crushing. Release me from the fury and stop this incessant pain! Please tell me you feel it too, deep inside your soul. Glowing. Flickering. Burning.


In her boldest and most darkly humorous novel yet, award-winning, critically acclaimed and bestselling novelist Louise Erdrich tells the intimate and powerful stories of five Great Plains women whose lives are connected through one man. Stranded in a North Dakota blizzard, Jack Mauser's former wives huddle for warmth and pass the endless night by remembering the stories of how each came to love, marry and ultimately move beyond Jack. At times painful, at times heartbreaking and often times comic, their tales become the adhesive that holds them together in their love for Jack and in their lives as women. - Goodreads

On March 25th, 1911, in the late afternoon, began a fire that would be one of the most remembered tragedies of New York City until the fall of the Twin Towers 90 years later. The Triangle Shirtwaist Factory Fire took 146 lives of young immigrant women: some died in the fire, others fell down an elevator shaft, a few more on the fire escape that collapsed beneath them, and the rest fled to the windows and were forced

Now, 102 years after the tragedy, a story emerges. By the winner of an American Voices Medal from the Scholastic Art & Writing Awards, and author of the novel "The Box of Secrets" and "Buried Alive: the story of Octavia Hatcher," "Burning" depicts the fear and desperation of the girls trapped on the eighth floor when the fire breaks out and follows them as they fight to put out the flames and one lucky survivor who makes it out only to watch from the street as her friends jump to their deaths from the burning skyscraper. - Amazon


What about you? Have you ever experienced emotions so powerful it placed a burning within you? Did you ever burn your hand or arm while cooking? Now that will also evoke a powerful emotion.