The past few years I’ve been busy writing, and writing and writing. Stories for years have been flowing in my mind, but I pushed them to the side hoping they would just disappear. They didn’t. I gave in a few years ago and I sat down in my family room and began to write. I didn’t think or plan what I was going to write about; I just let the first story begin, then the next story and the next one. Love stories, sci/fi, and children’s stories emerged.

But, (there’s always a but) one night December 18th, 2010, I couldn’t sleep. It happened to be my birthday. I went into my office late that night and I stared down at my hands. They were shaking uncontrollably, making it difficult to type. The tremors grew, as did my anger. I held my hands in the air, I yelled, “Happy Birthday dumb ass!” You see those four words brought A Faded Cottage to life.

I will step back in time, so you will understand about the tremors. When I was in my early twenties, I was standing at the post office window in Louisville, KY and I couldn’t even fill out a simple form with my name and address because my hands were shaking. It took some time, but I learned I had Essential Tremor. Essential tremor (ET) is a progressive neurological condition that causes a rhythmic trembling of the hands, head, voice, legs, or trunk. It is often confused with Parkinson’s disease and dystonia. People with ET are often stereotyped as being nervous, withdrawn, anxious, and elderly. ET is not confined to the elderly. Children and middle-aged people can also have ET. In fact, newborns have been diagnosed with the condition. I’m not alone over 10 million American’s have ET.

That one night, A Faded Cottage, a South Carolina love story, brought Quaid Witherspoon to life. 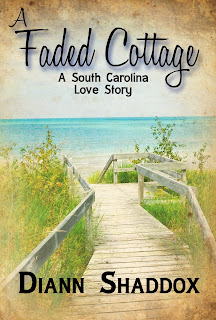 When a love letter written by a teenage boy becomes lost after a summer filled with passion, it brings about an incredible love story of two people being reunited after thirty years.

What if you were able to relive your life, if only for two weeks, and rediscover your teenage love? Would you?

Quaid Witherspoon is a man turning fifty, a man with success and money, a world acclaimed artist, but a simple feat of holding a paintbrush turns Quaid’s life upside down when fate steps in. Essential Tremors have taken over his body.

The calming waters off the coast of South Carolina call Quaid home to a small, faded cottage, one with a leaning front porch and worn paint so similar to him, flawed. And to the same beach where he began painting as a young boy, the place he met his one true love, and the place he let her go.

Sandy, Quaid’s lost love from the past, learns Quaid’s wondering about her, just as she’s wondering about him. Their love is still alive and when they reconnect, it’s easy to let the years they'd been apart fade away. But, sadly, fate has another twist.

A Faded Cottage is very special, a simple tale that tells a story about ET without the clinical or scientific information. It’s a story from the heart. The story tells how love can conquer all at any age. I hope A Faded Cottage will help spread the word about ET.

For each book, paperback or Ebook, sold, I am going to donate a percentage of its proceeds of A Faded Cottage to International Essential Tremor Foundation.

I have many more stories to write and I’m hoping to publish one of my other novels in the near future. I guess you never know which way life or fate is going to lead you, but I’m going along for the ride and I will keep adding pages in my book of life.